An Atlanta-area pastor who led a network of charismatic churches was found dead at his home Monday of what sources tell Charisma News was a self-inflicted gunshot wound. Bishop David Huskins had acknowledged suffering from heart-related health problems and recently talked of taking time off.

Polk County Police say they found the body of Huskins inside his home in the Meadow Lakes community late Monday afternoon, according to a report on WGAA-AM radio in Atlanta. He was pronounced dead on the scene. According to Polk County Police Chief Kenny Dodd, detectives said there was no foul play involved in the incident, but they declined elaboration about the cause of death.

A Christian radio station in Atlanta, Joy105.com, reported Wednesday that the cause of death was a self-inflicted gunshot wound. Emails and tweets among a number of pastors and charismatic leaders who knew Huskins said the same thing, but this could not be independently confirmed.

Huskins founded the Cedar Lake Christian Center in Cedartown near Atlanta and served as its senior pastor. He was also the presiding bishop of the International Communion of Charismatic Churches. He hosted a weekly radio program and made many appearances on Christian television.

Huskins also had a close association with Bishop Mark Chironna, senior pastor of an Orlando, Florida-area church, Church on the Living Edge. A representative said Chironna was not available for comment Wednesday but acknowledged that Huskins had spoken at the church in the suburban community of Longwood in the past.

According to a statement on Huskins’ Facebook page: “Our hearts are deeply saddened to share with you that our Bishop, David Huskins, has joined the great cloud of witnesses this afternoon We will have more information later that will be posted here. Please pray for his boys and the rest of the family, and our church family as we grieve the passing of one of the greatest servants we have ever known.”

Polk County police referred inquiries to Chief Dodd, who was not immediately available for comment on Wednesday.

Early last month, Huskins sent a long email to his congregation and friends saying he needed to take some time off to deal with health problems.

“It has been almost 20 years ago since I had open-heart surgery to repair a hole in my heart that had become critical,” Huskins wrote on July 10. “That started a series of mostly ignored warnings to take care of my heart health. Then in November, I had a mild heart attack (if there is such a thing) and that put me on a path to great introspection of all the areas of my life I had not properly dealt with. …

“While I am grateful for all the Lord has allowed me to do, I knew sometimes I had let ministry be a substitute for God. I felt Him dealing with me to let go of areas and delegate and release and spend more time with Him and with people not just always in a pulpit. I had started that process much earlier with seeking to place others in charge of the church and daily duties but still had not relinquished the active roles.

“Then over the past few weeks I experienced congestive heart failure twice, which forced the cancellation of our annual conference, and now I have been told medically I am at the point of complete exhaustion while still dealing with chronic congestive heart failure. After three nights in I C U and another two-night regular hospital stay along with several follow-up heart procedures and this past week a Transient Ischemic Attack (minor stroke) and the adaptations of all the medicines … and the on-going recovery process and having been admitted to bed rest, I am now forced to make some significant and important changes immediately. 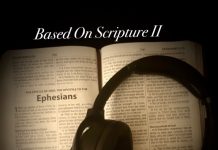 Album Release : Based on Scripture II by Sean Ware