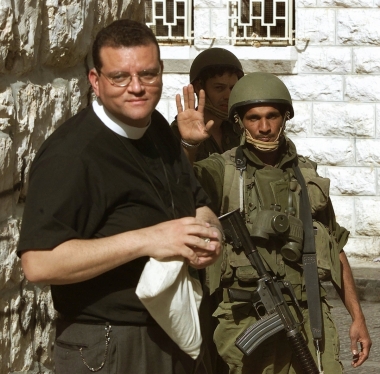 Four Christian young people chose death rather than forced conversion, according to Canon Andrew White, the Vicar of Baghdad.

In a CBN video released on the Orthodox Christian Network, White – who was ordered to leave Iraq for his own safety by the Archbishop of Canterbury – spoke movingly of the plight of Christians there. Around 250,000 have been displaced by Islamic State in the north of the country, all that remain from the 1,50,000-strong pre-war Christian population.

He said: “Things were bad in Baghdad, there were bombs and shootings and our people were being killed, so many of our people fled back to Nineveh, their traditional home. It was safer, but then one day, ISIS – Islamic State. They came in and they hounded all of them out. They killed huge numbers, they chopped their children in half, they chopped their heads off, and they moved north and it was so terrible what happened.”

Islamic State forced Christians to convert to Islam on pain of death, he said. “They came to one of our people the other day, one of the Christians. They said to one man, an adult, ‘Either you say the words of conversion to Islam or we kill all your children.” He was desperate, he said the words. And then he phoned, me and said, ‘Abouna [Father], I said the words, does that mean that Yesua [Jesus] doesn’t love me any more?’ I said, ‘Yesua still loves you, he will always loves you.'”

He told of the fate of a group of Christian young people. “Islamic State turned up and said to the children, you say the words that you will follow Mohammed. The children, all under 15, four of them, said no, we love Yesua, we have always loved Yesua, we have always followed Yesua, Yesua has always been with us. They said, ‘Say the words.’ They said, ‘No, we can’t.’ They chopped all their heads off. How do you respond to that? You just cry.”