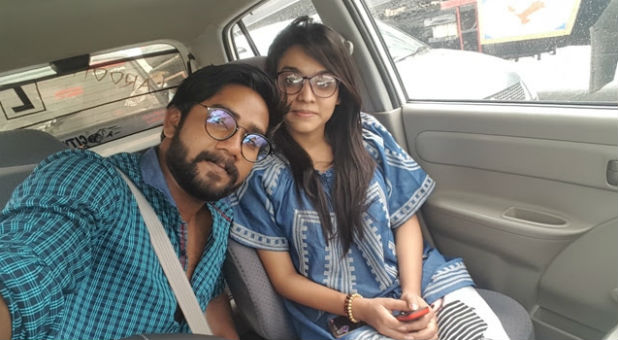 Chrisma reports – Dressed in pink, Naila smiles, but is this the face of a murderer?

The corpse of a young man who was missing for 40 days was discovered in a field in Sialkot, Pakistan. After pressure from a solicitor hired by the BPCA, a police investigation began, leading to the discovery of a murder plot linking the family of a girl named Naila Khalid Masih (26 years) who was involved in a relationship with the murder victim, Sharoon Bhatti (21 years). Although initially the murder was assumed to be an honor killing, further investigation elucidated a long-term scheme to extract money from young men through romantic seduction and murder.

Around 2 1/2 years ago (late 2014), Sharoon Bhatti, who lived in Gujaranwala, met a young woman named Naila Khalid Masih through Facebook. Naila lived in Sialkot, which was two hours away. The two of them started an online friendship that blossomed, and Naila shared with Sharoon Bhatti that she worked as a travel agent. Sharoon himself at the time was a student nurse and completed his course seven months later, by which time the two were very close friends.

Eventually, they shared telephone numbers and could be heard calling each other regularly as they developed a romantic relationship and started seeing one another when Sharron traveled to Sialkot. However, after completing his studies, Sharoon was placed at a hospital in Karachi for a male nurse training placement. Every semester, Sharoon would visit his family and stop to see Naila for a few days before he went home.

Naila’s family had two homes, one in Islamabad and one in Sialkot, and Sharoon would visit both locations to see her. After completing his two training placements, Sharoon came home to live with his family in October 2016. While there, he asked for 300,000 rupees (2224 pounds) from the family savings from an import and export business and the money came from a shared pot. Sharoon told his family that he was traveling to Dubai to start a new import and export business based on precious stones in Dubai. Later, the family discovered that Sharoon had actually simply use the money for the holiday with Naila after police found photos.

After four days, Sharoon returned home and stated that he started the business and brought back a few letterheads business cards as proof. His family trusted Sharoon, who up until this point had been a reliable and trustworthy son. Soon after Dubai (October – December 2016), he went back to his college at Sindhu Hospital Karachi to complete an internship that had been offered. Sharoon told his family that the internship required him to travel to Islamabad and Sialkot, but the travel to these locations was later discovered to be romantic trysts with Naila, during which it was believed he spent the remainder of the money he had taken from his family. The family also later uncovered that he had never begun the internship offered to him at Karachi.

On Dec. 29, 2016, Sharoon returned home and was found to be agitated and requested further funds of 600,000 rupees (4448 pounds), which his mother agreed to give him. He explained to his mother that he was going to Australia to live with Naila and start a professional career in nursing. He then drove away with the money, a laptop, a Samsung Galaxy Notepad smart phone and the family car, amounting to a loss of around 11,000 pounds. That was the last time any family member saw Sharoon alive.

On Dec. 30, Sharoon called his siblings in Thailand and sounded very tense. To his brother Moon Bhatti, he said:

“I am not marrying Naila, I have discovered something very bad about her.” Sharoon kept getting interrupted by Naila, who could be heard in the background shouting and trying to grab the phone.

“I can’t talk at the moment,” Sharoon said, “but I will tell you later because she is standing here before me causing problems.”

The phone call was terminated, and despite several attempts by the brothers to call back the phone remained unresponsive.

For the whole of January, no contact was received from Sharoon. Then on Feb. 1, 2017, Moon received a message from Sharoon’s Skype account in which was written: “I am very frightened I have killed the son of a Member of National Assembly (MNA) and right now I am in a internet cafe and I have sold my car in fear that I will be caught.”

Moon asked Sharoon to call him. No call was received, but Moon was prompted to chat via Skype messaging.

A further response was written that said: “To escape the heat, Naila and I will be travelling to Karachi and from Karachi, we travel by ship to Turkey.”

After two or three days ,Moon received a Skype message which read as follows: “Send me a telephone number and I will call you.”

Moon sent his number, and the next day, an unknown person from Turkey called Moon and stated that a young woman and man had been found dead after jumping off a ship, in what he reported looked like a suicide incident. When Moon asked how the man found his number, he was advised by the passenger that he had been residing in a room next to Naila and Sharoon and had found the number in their room after the incident.

On March 1, Moon Bhatti (27 years) returned to Pakistan along with his sister Mehwish (25); he had been residing in Thailand. They took over the search for their missing brother and immediately set about calling Naila Khalid’s family. To their increasing anxiety, they discovered that the family was not responding to their numerous calls.

On the evening of March 11, the family was visited by local police officials, who advised them that a dead body had been found and was suspected to be that of Sharoon Bhatti (21 years). The family were asked to identify the corpse which had been found in some fields within Pasrur Sialkot and left immediately for Sialkot.

After identification of Sharoon’s corpse, the family was provided with a death certificate that estimated the date of death as Feb. 1, 2017. The post-mortem report established three minor injuries on the neck of Sharoon and a fracture on his left ankle. It was surmised that Sharoon was killed by strangulation that resulted in restriction of the windpipe. The post-mortem had been conducted in the District Headquarters, Sialkot. The family immediately pursued an FIR against Naila Khalid and her family at Pasrur Police station.

During a search of the Naila family home, local police found a marriage certificate of Naila Khalid and Sharoon, which was later found to be a fake. Sharoon’s bank statement was found at Naila’s home, as was his luggage and one broken mobile phone which they believed belonged to Sharoon. After inspection, all the items were handed over to Sharoon’s family.

Despite police insouciance, the family, now supported by the British Pakistani Christian Association, paid for the phone to be repaired and discovered the phone had belonged to Naila. When Mehwish Bhatti, our lead officer in Pakistan, and the family looked through messages and images, they were flabbergasted by the contents. Images within the phone indicated that Naila had two passports, one that gave her a Christian identity and the other older one registered her with an alternative name, Sana Zaman, and Muslim faith.

Or is her real name Sana Zaman, and is she Muslim?