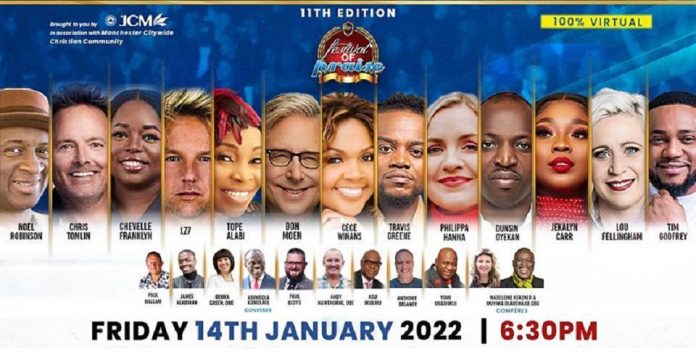 Festival of Praise (FOP) is a free annual musical event that hosts a night of praise, worship and prayer for the city of Manchester and the United Kingdom. Its first edition was held in 2011 at the O2 Apollo Theatre Manchester. It came about as a result of a long awaited vision given to the Senior Pastor of Jubilee Church – Pastor Abimbola and Folu Komolafe. After earnestly seeking the face of God for revival and the growth of the body of Christ in Manchester and the UK at large, this vision was birthed and resulted in the catalyst for revival called Festival of Praise.

Apart from promoting revival in the city of Manchester and the United Kingdom, FOP is also an avenue for bringing together people of diverse backgrounds and cultures from across the UK to celebrate our faith in Jesus Christ as the Saviour of the world and also encourage community cohesion. The Christian Community in Manchester and UK has rallied behind the vision of making Festival of Praise a successful annual event.