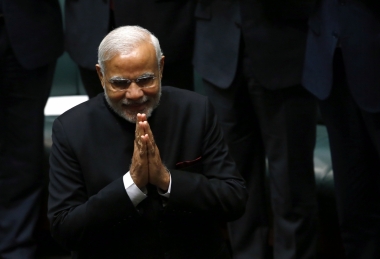 Members of the Indian parliament have protested against forced conversions of Muslims and Christians to Hinduism.

Opposition MPs accused the prime minister, Narendra Modi, of failing to stop the conversions. The parliament’s upper house had to adjourn because of the protests.

Conversions are legal in India but must be done without force, fraud or inducement.

The BBC reports that Hindu groups close to Modi’s Bharatiya Janata Party had organised several ceremonies in recent weeks. Weeks ago in Agra, more than 50 Muslim families became Hindus. And in Gujarat last weekend, about 100 Christians were reported to have become Hindus.

The groups responsible insist the conversions have been voluntary and argue the converts are merely returning to the faith of their forefathers that their families abandoned centuries before. The conversion ceremonies are called “ghar vapasi”, which means “returning home”.

According to Reuters, the conversions protests are a setback for Modi’s reform agenda. Reuters reported that comments by the head of the right-wing Hindu group, the Rashtriya Swayamsevak Sangh, that India was a “Hindu nation” provoked a storm of criticism, ending any chance of opposition support for government business in the upper house of parliament, where Modi lacks a majority.

About one fifth of India’s 1.2 billion people are members of a non-Hindu faith.