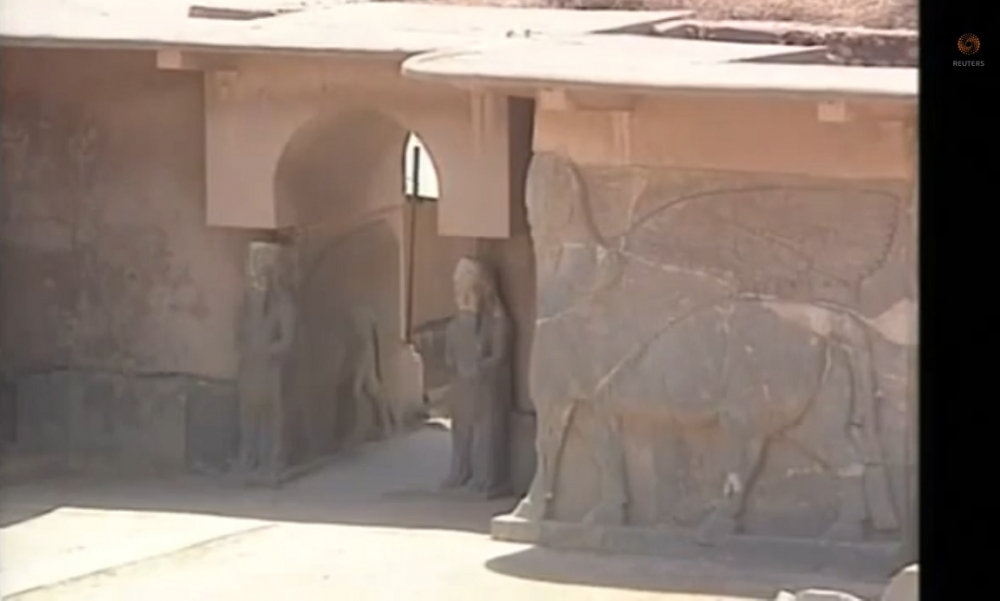 ISIS has destroyed the ancient city of Nimrud in Iraq, with video published March 6, 2015.

Christian Post Report – Terror group ISIS has been bulldozing and destroying the ancient biblical city of Nimrud, Iraqi officials have said. The U.N. and the international community at large have condemned the “war crime,” which Iraq has said is aimed at erasing the country’s history.

BBC News reported that on Thursday ISIS began the destruction of the ancient Assyrian site, founded in the 13th Century BC.

“In a new crime in their series of reckless offenses they assaulted the ancient city of Nimrud and bulldozed it with heavy machinery, appropriating archaeological attractions dating back 13 centuries BC,” the United Nations cultural agency UNESCO said.

UNESCO head Irina Bokova added: “This is yet another attack against the Iraqi people, reminding us that nothing is safe from the cultural cleansing under way in the country: it targets human lives, minorities, and is marked by the systematic destruction of humanity’s ancient heritage,” she said.

The government of Iraq argued that ISIS militants are defying “the will of the world and the feelings of humanity” by destroying the famous archeological site.

“Islamic State members came to the Nimrud archaeological city and looted the valuables in it and then they proceeded to level the site to the ground,” a Mosul tribal source told Reuters. “There used to be statues and walls as well as a castle that Islamic State has destroyed completely.”

A number of other cities and empires mentioned in the Old Testament of the Bible are located in what is now northern Iraq.

Nimrud, which lies 18 miles south-east of the ISIS stronghold of Mosul, was the second capital of the ancient kingdom of Assyria. It was destroyed in 612 B.C., and rediscovered in the 19th century in a major archaeological find.

ISIS, which is seeking to establish an Islamic caliphate in Iraq, Syria, and the surrounding region, has called the artifacts in Nimrud “false idols” that need to be destroyed.

Iraqi archaeologist Lamia al-Gailani told BBC: “Nimrud for us in Iraq and for me as an archaeologist is one of the most important [sites]. There are still quite a lot of things that are standing — the reliefs and the statues, the famous winged bulls.”

He added: “They are erasing our history. I wish it was a nightmare and I could wake up.”

John Curtis, the president of the British Institute for the Study of Iraq, also called Nimrud “the best preserved Assyrian site in Iraq” and said that ISIS’ attack is a “horrific crime against the cultural heritage of the whole world.”

ISIS has targeted archeological treasures before, and last week it released a video showing militants destroying with sledgehammers historic artifacts in a museum in Mosul.

Suzanne Bott, the heritage conservation project director for Iraq and Afghanistan in the University of Arizona’s College of Architecture, Planning and Archaeology, said that she worked at Nimrud between 2008 and 2010, Fox News reported. She explained that the ancient city practiced medicine, astrology, agriculture, trade and commerce, and had some of the earliest writings.

“It’s really called the cradle of Western civilization, that’s why this particular loss is so devastating,” Bott said. “What was left on site was stunning in the information it was able to convey about ancient life.

“People have compared it to King Tut’s tomb,” she added.