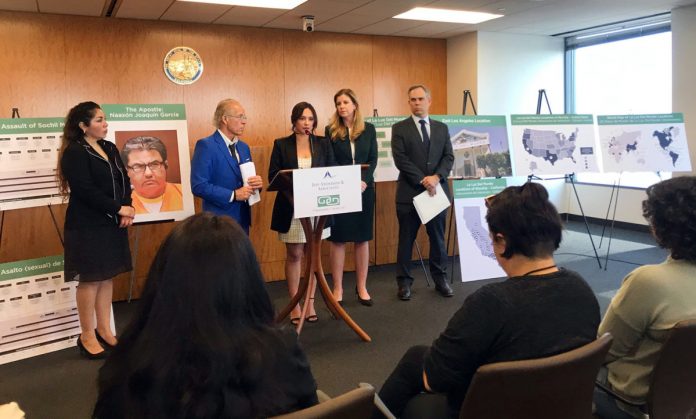 LOS ANGELES (RNS) — A former member of La Luz Del Mundo, a Mexico-based Pentecostal movement that claims 5 million members, is suing the church and more than a dozen of its leaders, alleging decades of abuse at the hands of the group’s leaders.

“This case is about a lifetime of manipulation and abuse of a young woman perpetrated by sexual predators and the global institution built around and for the protection of those predators,” the lawsuit states.

At a news conference in downtown Los Angeles, Martin, 33, detailed the sexual abuse she says she endured within the church. Her husband and former La Luz Del Mundo members were at the news conference, which was held on the same day the church was hosting its Holy Supper ceremony at the Fairplex in Pomona about 30 miles east of downtown Los Angeles. In a statement Thursday evening, the church said it will continue to celebrate the third and final day of the Holy Supper on Friday despite the lawsuit.

“By the age of 9, I was taught by my own family and community that my eternal soul depended on me sexually pleasing La Luz Del Mundo apostles,” said Martin, who grew up attending a La Luz Del Mundo church in Los Angeles.

“For nearly 22 years, I was made to work for, travel for, lie for and give my body to an organization that saw me as nothing more than a source of profit,” she said.

Martin related how parents and the church community taught young girls that “God wants them to please their apostles.”

García was arrested in June and charged with sex crimes involving minors. He has denied the charges against him and is awaiting trial in California.

The new lawsuit alleges that over a period of 22 years, Martin was “raped dozens of times, and endured numerous severe beatings, causing physical, emotional, and mental injuries that afflict her still today.”

“Throughout, she was taught by LDM’s leaders that her only value and chance at salvation lay in serving the sexual whims of the two Apostles, which at times included forcing others to have sex with children,” the suit claims.

The suit also alleges that Martin was forced to spend at least 30,000 hours working for the church, without pay, to promote its activities.

Martin said the food the pastors eat and the celebrations the church hosts “come from the hard work of La Luz Del Mundo members that have no choice” but to do whatever the church asks of them.

Martin was not alone, the lawsuit alleges.