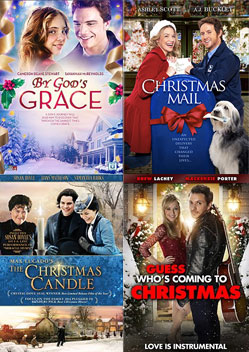 That’s right…radio stations are playing the music, stores are stocking their shelves, and communities are stringing lights. The Christmas season may not be in full force until after Thanksgiving, but preparations are well underway everywhere you look. How about you? Have you brought down the box of favorite Christmas DVDs, or are you looking for the newest Christmas releases? Well, here they are in our Christmas DVD Roundup! Below, read about and watch the trailers for the newest releases, and check out our Staff Picks for old favorites.

To the world, 16 year old Chris Taylor had everything. He had loving and giving parents, a new found love in his childhood friend, and adoration in his little sister. Then tragedy struck that Christmas Eve, leaving Chris to lead a lonely and empty life that would have ramifications to everyone around him. Chris will learn that the heartbreak of the past doesn’t have to form the future. With love and Grace, he will mend the hurts that he caused.

Sparks fly during the holidays when Postman Matt (A.J. Buckley, CSI: NY) meets mysterious new coworker Kristi (Ashley Scott, Jericho). As an official “Santa Writer”, Kristi is buried in children’s letters to Santa. Her job—to respond to every letter addressed to St. Nick. Their petty boss is suspicious of this new employee and enlists a reluctant Matt to spy on her. The more Matt gets to know Kristi, the more he falls for her. After learning of Matt’s forced betrayal, Kristi is devastated and leaves the post office. Will the magic of the Christmas season be enough to bring them back together? Christmas Mail is an endearing Christmas tale that will appeal to the entire family this holiday season.

Deep in the heart of the English countryside lies the enchanting village of Gladbury. Legend has it every twenty-five years an angel visits the village candlemaker and touches a single candle. Whoever lights the Christmas Candle will receive a miracle on Christmas Eve. But in 1890, at the dawn of the electric age, this centuries old legend may come to an end.

When David Richmond (Hans Matheson), a progressive young minister from London arrives in Gladbury, the villagers discover a new formula for miracles; good deeds and acts of kindness. Now with a skeptic in the pulpit, the fiery candlemaker Edward Haddington (Sylvester McCoy) must fight to preserve his family’s legacy. When the Christmas Candle goes missing the miraculous and human collide in the most astonishing Christmas the village of Gladbury has ever seen.

Jaded rock star Dax is found by New York paparazzi passed out in his car with a frozen holiday turkey in the passenger seat. In order to repair his tarnished image, Dax publicly agrees to grant a fan’s “Dear Santa” Christmas wish. To his dismay, his manager Jason drops Dax off in Cedar Grove, a Midwest small town, where he’s committed to spend a week and perform in a local holiday Christmas concert.

At first, Dax is horrified to be stuck in the Reverend Harding family’s home with strict rules and a curfew. In spite of himself, he soon becomes charmed by the Reverend’s wife Lynne , teenage son Tim, and very surprised contest winner and daughter Kelly, a sassy, unemployed book jacket writer.

On Christmas Eve, ten-year-old Goose hides his fireman father’s car keys to prevent him from going to work. Instead, his mother drives his dad but the delay has tragic results. A year later Goose, a lost soul, is troubled and searching to replace all he has lost when mysterious stranger, Anthony arrives. Anthony appears to have a special gift which enables him to find what each person lost on Christmas’ past. Witness a miracle of the holiday season as a boy finds magic in the least expected place.

Get festive down on the Bayou with the Robertson clan in this Duck Dynasty: Duck The Halls DVD set from A&E. They’re living their own special brand of the American Dream running a multimillion-dollar family business, remaining true to themselves and their Southern roots. Come duck the halls with them at Christmastime as they perform a live nativity scene for their church in “O Little Town of West Monroe.” Willie plays Joseph, Jep the innkeeper, while Si insists on playing the wise man with the “franken-scent.” And life’s a feast in “Winner, Winner Turkey Dinner” as Jase and Si embark on a turkey hunt for the annual Robertson men vs. Robertson women cook-off. With Phil’s discerning palate as judge, the teams pull out all the stops with their best country cookin’ secrets. Who knew you could have so much fun in the backwoods.