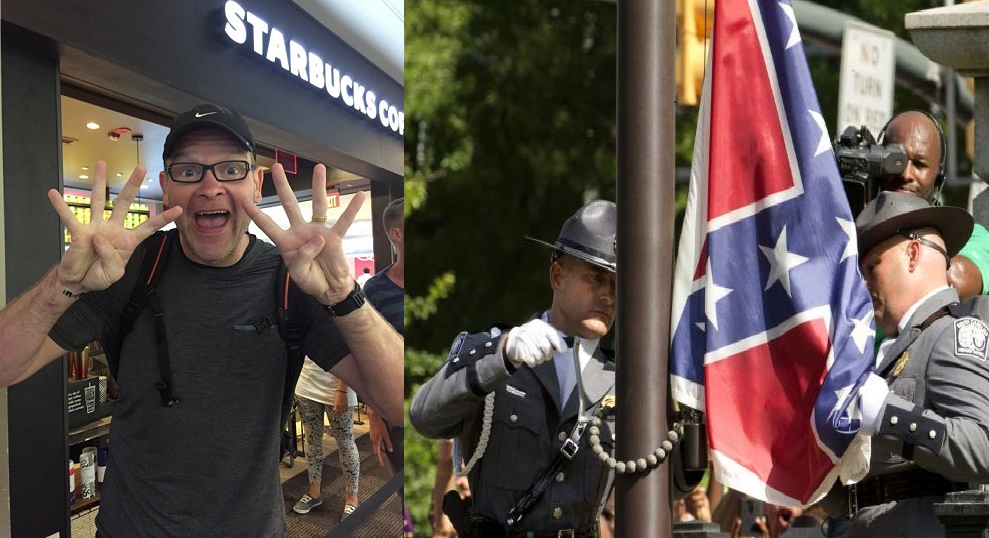 Perry Noble, pastor of NewSpring Church in South Carolina, revealed last Friday that he used to be a “racist” and spouted the n-word “recreationally” with his family until he found Jesus.

Perry made the revelation in a blog post in which he explains why he believes removing the Confederate flag from the South Carolina Capitol grounds after 54 years was the right thing to do.

“I was not born in the South, but, by the grace of God my parents got me here when I was 4 years old by moving our family from Los Angeles to Easley. I was introduced to sweet tea, biscuits and gravy and fat back— and knew this was the greatest place in the world,” said Perry.

“I was also a racist. My grandparents used ‘the n word’ recreationally. In fact, most white people I knew did —and so I did too. I did not see black people as individual people with real hearts, real souls, real feelings and who really mattered to God — I saw them as a group of people who were different than me, thus allowing me to place them in a category and dismiss them as unimportant,” said Perry.

“But … something happened in me in 1990 that would begin to change (and is still changing) the way I see people — I prayed to receive Christ in my life, which truly is the catalyst for the changing of my heart and mind on the issue of the Confederate flag,” continued the megachurch pastor.

The Christian Post reached out to Swift Monday for comment in light of Noble’s recent confession that he used the n-word recreationally in the past but a response was still pending at the time this story was published.

The Confederate flag which has been decried as a symbol of hate was removed last Friday morning after a deep-seated fight over its use was reignited by the massacre of nine black members of the historic Emanuel African Methodist Episcopal Church in downtown Charleston last month.

And Perry, in celebration, tweeted: “Thankful that the leaders in our state did the right thing — it is a major step toward reconciliation!”

Thankful that the leaders in our state did the right thing – it is a major step toward reconciliation! pic.twitter.com/02Wcfc0SbC

The NewSpring pastor, who was once a staunch defender of the Confederate flag, said he used to defend it for historical reasons.

“In 2000 there was a major battle in the state to remove the flag from flying over the capital — and I had very strong opinions in regards to the fact I thought the ‘stars and bars’ should continue to fly. I used the ‘heritage, not hate’ argument and claimed it was a part of the history of our nation, and that the memory of what happened needed to be preserved,” he noted.

Now, he explains, he’s changed his stance on the Confederate flag because he began to “develop and value friendships with people who are black” and he took a hard look at “the harsh reality of the Civil War.”

“White people don’t see it (Confederate flag) as that big of a deal — but a white man has never cried the tears of a black man. We don’t know the struggle of being considered a minority, we do not know the pain of having derogatory names screamed at us by passing cars, nor do we have to fear if someone sees a group of us standing around then it is automatically assumed we are involved in some sort of illegal activity,” said Noble.

“Romans 14:13 clearly tells me that if there is something that causes my brother or sister to stumble, then I should take steps to remove it,” he continued.

“Like it or not, the Confederate flag is a major stumbling block that has prevented white people and black people from being able to sit at the same table for too long,” he said.

“… For those who stand in support of the flag let me take a second to ask you, honestly, how is your heart? How do you view other people who have a different skin color than you? Have you ever really thought about how human trafficking and the Civil War go hand in hand?” he asked.

“I know there are some who will disagree, which is your right as an American (not a Confederate)! However, I am celebrating this decision in our state — I do so publicly and unapologetically and pray that people can set aside decades of a sinful, racist filter through which they viewed life and understand that the Gospel actually brings us together — not drives us apart.”