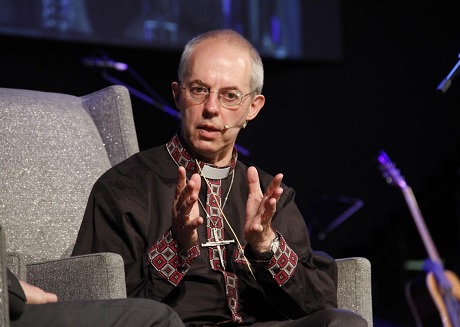 Report by Bellah Zulu of ACNS from Johannesburg

In an address to the Anglicans Ablaze conference in Brynston yesterday, Archbishop Justin spoke of the importance of reconciliation and the renewal of prayer. Listen to the talk below.

The Archbishop urged Christians to commit to the disciplines of prayer and of spending time in “contemplation and wonder”, saying “there has never been a renewal of the Church without the renewal of prayer.”

Listen to the Archbishop’s talk  – from www.archbishopofcanterbury.org

The Archbishop of Canterbury Justin Welby has called on Christians to the disciplines of prayer and spending time in “contemplation and wonder” saying “there has never been a renewal of the Church without the renewal of prayer.”

The spiritual leader of the world’s 85 million Anglicans made the call yesterday during his keynote address to delegates at the Anglicans Ablaze conference in Johannesburg, South Africa.

“Jesus calls us ‘the light of the world’ but our internal issues make us hide the light under a cover,” he said. “However, prayer changes us and the closer we are to the Light the more we change.” Archbishop Welby referred the delegates to the many instances in history and Scripture when prayer changed people and drew them into communion with God and others.

Archbishop Welby also talked about the need for reconciliation in the world. “Reconciliation is a complicated, fragile product and it takes time,” he explained. “The mistake is to ignore it. It’s like a bicycle, when you stop riding, it will fall.”

“Are we going to be like a political party in the Church by excluding those that disagree with us?” he asked. He explained that the Church does not have the luxury of throwing out people with whom it disagrees. He challenged the Southern Africa Church to be a beacon of hope on diversity and many other issues in the church.

“The Anglican Church is building bridges and it seems building bridges is one of the charisms of Anglicans,” he said. He warned of a storm that brewing in some parts of the world that was already raging in others and said “Anglicans are the beacons of hope in this storm.”

The Anglican challenge: Be ourselves reconciled

During a Q & A session moderated by Bishop Peter Lee of the Diocese of Christ the King in Johannesburg, Archbishop Welby addressed the various issues affecting the Church today. “The first challenge is to be ourselves reconciled,” he said. “We have to learn to find a way of the Communion holding together.”

“The gap between poverty and wealth is another of the biggest challenges in the Communion and not just the issues of sexuality,” he added. The Archbishop expressed his love for Africa and the Church there, explaining that it was where he met Christ back in the 70s.

Archbishop Justin’s programme for his time in South Africa included a visit to Alexandra, one of the oldest – mainly black and poor – townships located close to the wealthy area of Sandton.

While there he held a service at St Michael and All Angels Parish before leading a walk of witness to a small one-roomed house in the heart of the township where Nelson Mandela first lived when he moved to Johannesburg in 1941.

During a special session with young people at the Anglicans Ablazeconference centre, Archbishop Welby washed the feet of twelve young people; an act which made a number of participants shed tears. He referred to Jesus’ teaching that whoever wants to become a leader must become the servant of all.

Some of the young people expressed their gratitude to the Archbishop for his visit and for his interaction with them.

Nkanyiso Radebe is a young Anglican from Christ Church Mayfair Parish in Johannesburg. He said, “The session with the Archbishop Canterbury touched me very much because he has a way of connecting with the youths. However the washing of feet is what was most touching and such a huge step and example to us.”

One of those who had their feet washed was Mhleli Makabongwe. She is a young leader and a passionate Anglican from the Diocese of Natal who is involved in various ministries in her church including evangelism and helping to train servers.

Describing what she likes about the conference Miss Makabongwe said, “There are more programmes and activities in this conference than the last. I especially love the praise and worship and the attendance. But what has challenged me the most are the discipleship sessions because [discipleship] helps lay the foundation for building a church.”