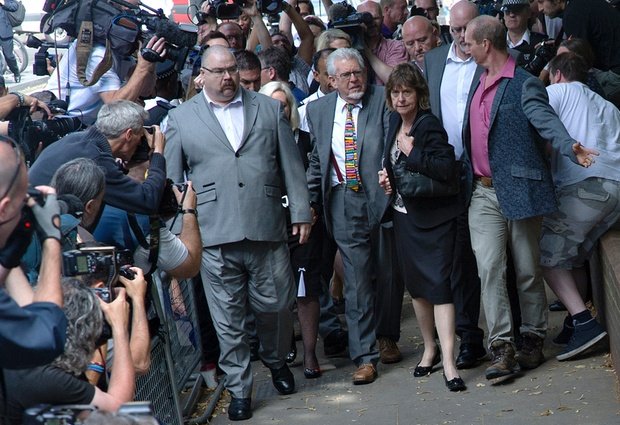 Report & Picture by mail.com | AP
LONDON (AP) — Television entertainer Rolf Harris, who for decades cultivated an image of the affectionate uncle with numerous children’s television programs, was sentenced Friday to five years and nine months in prison for a string of abuses against young girls.
Judge Nigel Sweeney told London’s Southwark Crown Court that the performer, a fixture on British and Australian screens for years, had abused the trust of millions. Ignoring the appeals of Harris’ attorney that the trial had punished him enough, Sweeney ruled that he must spend time behind bars for the 12 counts of abuse that took place from the 1960s to the 1980s.
“You have shown no remorse for your crimes at all,” Sweeney said. “Your reputation lies in ruins, you have been stripped of your honors. But you have no one to blame but yourself.” The sentence was a spectacular fall from grace for the Australian-born celebrity who had been well respected in both countries.
He was granted the privilege of painting an official portrait for Queen Elizabeth II for her 80th birthday, and performed at the monarch’s Diamond Jubilee concert outside Buckingham Palace in 2012. His conviction follows investigations into sex abuse allegations from decades ago against a number of British celebrities, including the late BBC TV host Jimmy Savile, who was a friend of Harris. After he died in 2011, police determined Savile had molested hundreds of young people.
Wearing a colorful tie, Harris smiled briefly but did not respond to reporters shouting questions about whether he had anything to say to his victims. Once in court, prosecutors read out statements by victims, including one describing how the attacks made her feel “dirty, grubby and disgusting.”
“The knowledge of what he had done to me haunted me,” the statement said. “However, his popularity with the British public made it harder for me to deal with.” Harris was accompanied in court by his daughter Bindi, whose friend was one of his victims.
Harris’ sentence prompted at least 12 new allegations against him to emerge, according to the law firm Slater & Gordon.