‘Son of God’ Actor Diogo Morgado on ‘Love Finds You in Valentine,’ Spirituality 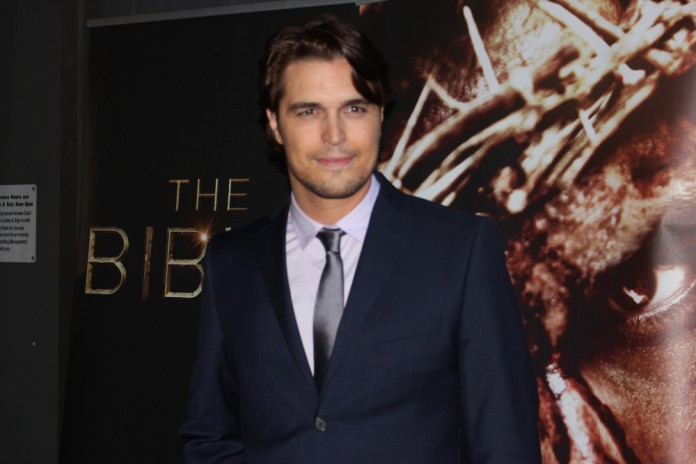 Christian Post Report – Actor Diogo Morgado, who played Jesus in “The Bible” series, is seen here at “The Bible Experience” event on March 19, 2013 in New York.

Just in time for Valentine’s Day, “Son of God” actor Diogo Morgado discussed his lead role in the upcoming heartwarming flick, “Love Finds You in Valentine.” The movie is set to captivate audiences with an inspirational story of love, family and the power of redemption.

Premiering this Valentine’s Day, this UP original movie “Love Finds You in Valentine,” stars Morgado (“The Bible,” “Son of God”), and Michaela McManus (“Aquarius,” “One Tree Hill”) in a romantic, modern-day Western tale.

Based on the popular book by Irene Brand, the film is the third installment in UP’s highly rated “Loves Find You” movie franchise. Morgado plays an adult Derek Sterling who was a former troubled kid from the city who was adopted by a woman named June, played by Lindsay Wagner (“The Bionic Woman”). Sterling was able to turn his life around because of his adopted mom, who refused to give up on him.

The actor said his role was not originally written with so much struggle but he felt compelled to play it harder so that it could be believable.

In “Love Finds You in Valentine,” Morgado’s character ends up falling in love with the leading lady, Kennedy Blaine (McManus), a law student who inherits a ranch in the small-town of Valentine, Nebraska. She travels to Valentine with the intent of selling the ranch, but is drawn to the area’s beauty – and to the ranch foreman, Derek (Morgado). Shortly after, Kennedy is subjected to harassment by someone who clearly wants her to leave Valentine . Also, her new love interest Derek’s own past becomes a threat.

Morgado said he and his co-star wanted the romantic parts of the film between Derek and Kennedy to be organic. They chose not to push the envelop with their love scenes but instead to leave everyone in anticipation.

“When the kiss happened it was natural and I think sometimes it’s hard to tell that in a truthful way,” Morgado revealed.

“It’s the fuel of the world, it’s what makes us wake up in the morning, it’s love regardless if its it a romantic love, if it’s a friendship love, if it’s a community love, it doesn’t matter – it’s all love,” he continued. “Love is the most suggestive thing in the whole entire world. What’s love to me might not be love to you.

The “Love Finds You” book series was launched in October 2008 by Guideposts imprint Summerside Press with the goal to give readers a taste of local life across America. Each of the almost 60 novels to date – by revolving authors – draws on the compelling history or unique character of a real place. Every one of the “Love Finds You” films to date have made mention of faith, a topic Morgado has covered quite extensively recently with his groundbreaking portrayal of “Jesus” in 20th Century Fox’s feature film “Son of God” and in The History Channel’s highly rated, Emmy nominated miniseries “The Bible.”

“I think there’s nothing more personal than faith and what people believe,” Morgado maintained.

“As an actor I’m drawn to stories and this is my job. To be honest the element that makes me [choose] a story or be involved in a project, is only if it makes sense to be a part of that story, if I will learn something as an actor. Hopefully stories like “Love Finds You in Valentine” will give people an uplifting feeling [from] an inspirational story,” he noted.

Morgado admitted that “yes” he would love to do more inspirational, faith-based film, but confessed it’s not the guidelines of what he does as an actor.

“I think I’m the most privileged guy in the world by being an actor because I think storytelling is one of the most powerful tools in the universe. I think the fact that we all love and get drawn by stories is because of that. Storytelling is the core of being human,” he declared.

Every time he plays a character he said he’s touching on what it means to be a human being. He aspires to always play roles that lead to the greater good in the end.

“Sometimes I’ll be the bad person that brings that other [character] back from being in darkness. Sometimes I’m the reminder for the audience to be grateful for what they have because there’s darkness in the world,” Morgado described. “Whether I’m playing the bad or the good I’m still serving. That’s what I think serving humanity is. Serving [is] what it means to be in this world.”

In “Love Finds You in Valentine” the characters are faced with much opposition but as they stick together they overcome. Morgado believes that community is what we were made for.

“Being human is – we are spiritual persons, that’s what separates us from the rest of life,” the Portuguese native explained. “We are people, we go down and we go up and we have to look up for something, we have to wake up aiming for something. Life is tough, it brings us down more than it brings us up [and] because of that and because of the nature of life really we all need each other.”

June is Derek’s lighthouse in the film, taking an orphan in as her own and never losing faith in him. He in turn becomes that saving grace for Kennedy, and Morgado insists that everyone needs that.

“We all need someone to be our lighthouse, the person bringing us up when we’re down, and probably even [to] ground us when we’re going too high. That’s why as a society we group up as family, we group up as soccer teams. We need to be with people, we need each other,” he concluded.