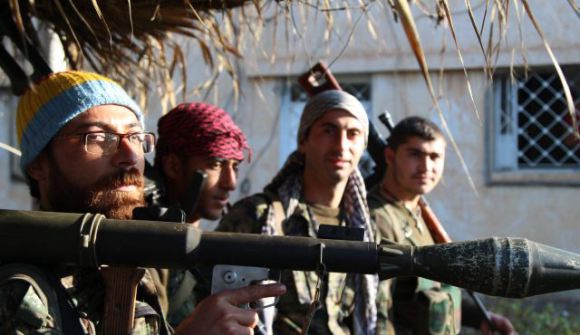 Commander Johan Cosar stands on the rooftop of an abandoned home in the Syriac Christian village of Gharduka, about 60 kilometers southwest of Malikiya in Syria’s northeastern corner. He points toward a vast field: “That’s where Islamic State is, one and half kilometers from here,” he says, referring to the organization that is also known as ISIS or ISIL.

The rundown building serves as a military base for the Syriac Military Council (also known as MFS), the Syrian-based military branch of the Mesopotamian National Council, an international organization founded to aid Syriac communities around the world. The soldiers, members of the oldest Christian community in the world, are fighting a battle to keep their identity alive and their homeland from falling into the hands of what they call foreign invaders. They work hand-in-hand with the community’s security force, Sutoro.

The violence and targeting of minorities by radical jihadist groups including Islamic State has led tens of thousands of Christians to flee their towns and villages in Iraq and Syria.

“At the time the north of Syria had not been touched by the violence of the war, but it was moving this way, so I said ‘We need to do something,” he explains.

Cosar took it upon himself to train young Syriac men who had taken up arms but had very little or no military experience: “The idea was to create an internal military force that could defend the territory and towns of our people and other civilians, there was a primary need to organize ourselves militarily,” Cosar says. The formation of the MFS combat units was officially announced on January 8, 2013.

The training is akin to what Cosar received in the Swiss Armed Forces. The men are trained in both light and heavy weaponry, including hand grenades, sniper rifles, Kalashnikov assault rifles and Russian-made “Dushka” heavy machine guns. Hundreds of youths have gone through it and while the majority of them are over 18, some appear to be younger.

“We’ve trained them on how to use arms safely, the weapon needs to be a part of you. You should have control of the weapon, not vice versa,” explains Cosar. He says there have not yet been any fatalities, but a few of his men have been injured in battle.

“As Christians we are not only fighting against the Islamic state, we are fighting against a state that hates us. Our situation is a bit more dangerous,” he adds, as plumes of black smoke from the Islamic State’s improvised oil refineries mushroom into the sky…Read More