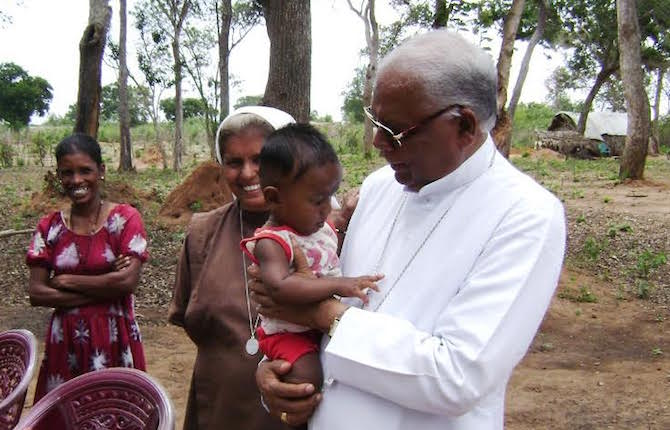 Bishop Rayappu was a powerful witness to a genocide that Sri Lankan state sought to conceal by ejecting all foreign presences and thus was staged without international witnesses on the ground.”

The Transnational Government of Tamil Eelam (TGTE) parliament during its monthly session paid homage to the late Bishop Rayappu Joseph who passed away in Jaffna on April 1, 2021, 15 days shy of his 81st birthday and Urged the Catholic Church to Canonize the Heroic Bishop as a Saint.

Born on April 16th in 1940 on the island of Neduntheevu, Bishop Rayappu lived a courageous and noble life dedicated to the pursuit of truth and justice no matter the risk, earning himself the moniker among Eelam Tamils “the Voice of Justice.” Ordained Bishop of Mannar in October 1992, Bishop Rayappu’s commitment to law, human rights, and dignity stems all the way back to his schooling. After attending St. Patrick’s College in Jaffna, he earned a doctorate’s degree in Canon Law from the Pontifical Urbaniana University in Rome, Italy.

TGTE’s prime minister, Mr. Visuvanathan Rudrakumaran, noted in his tributary speech during the organization’s meeting on Saturday, “Bishop Rayappu played an important role in establishing that Sri Lanka’s actions against Tamils in 2009 constitute mass atrocity crimes;Nobody has been able to challenge his finding based on statistical calculations that 146,679 people were killed. He was a powerful witness to a genocide that the state sought to conceal by ejecting all foreign presences and thus was staged without international witnesses on the ground.”

“In 2011, the Bishop, along with other high-ranking Catholic clergymen, submitted their long criticism of the state and its military actions against Tamils in the north during the conflict to the LLRC. Given the commission was created by the very leaders he and his peers denounced, this was an act of great courage,” Mr. Rudrakumaran added.

“Throughout his life, because he publicly and unabashedly spoke truth to power, Bishop Rayappu was the embodiment of the Tamils’ cry for justice for the Mullivaikal Genocide,” Mr. Rudrakumaran said.

Mr. Rudrakumaran then recalled to TGTE’s parliamentarians from around the world, “Bishop Rayappu also embodied the Tamil call for freedom and self-determination and played an important role in Tamil liberation politics. The Bishop called for the unity of the Tamil leaders, and by extension unity of the Tamil people. He also promoted the unity of Tamil Hindus and Christians in the basis of Tamil Nationalism.”

During his closing remarks, Mr. Rudrakumaran stated, “Although we have lost the Bishop’s voice, his vision and mission lives on in us. Today, Eelam Tamils worldwide are more united in our call for justice via ICC referral than ever before, for example, and so, continuing to dedicateourselves to ensuring that accountability for the crimes for which the Bishop risked his life to expose andcondemn is finally achieved is the greatest sign of respect we could and should pay to Bishop Rayappu’s legacy.From one voice of justice, comes many.”

Mr. Rudrakumaran was joined by other parliamentary members of TGTE in honoring Bishop Rayappu.

Ms. Rajanidevi Sellathurai, the deputy speaker of the TGTE said in her condolence message, “The passing of Rev. Rayappu is not only a loss for Eelam Tamils but also for the Tamils across the world.” She also emphasized the fact that no one was able to challenge his finding that 146,679 Tamils were killed during the final stages of the war.

Mr. Vijitharan Varatharajah, a TGTE parliamentarian, recalled in his remembrance speech that before 2009,Rev. Bishop Rayappu acted as shadow of the Tamil National Leader Mr. Velupillai Pirabaharan and the significant role the Bishop played in conveying thelegitimacy of the Tamil Struggle to the international community as a witness to the Tamil Genocide.

“Rev. Rayappu slammed the conscience of the world by giving the accurate number of the Tamil casualties,” Mr. Vijitharan said.

Mr. Vijitharan then recognized that even until the day of Bishop Rayappu’s death, the Bishop guided the Tamil People and strengthened Tamil Nationalism. He concluded by saying,” I bow my head to that sacred individual.”

Mr. Thavendra Rajah, a TGTE parliamentarian, also spoke, recalling that during the war, when the Sri Lankan state, in a calculated manner, reduced food and medicine to cause the physical destruction of the Tamils by saying there were only few thousands of people when in fact there were tens of thousands, Rev Rayappu bravely called out to the government’s lies, citing the state’s own reports that discredited its public narrative and exposed thereports to the world.

Mr. Roy Wicknarajah, a TGTE parliamentarian, in his remark stated that when the Sri Lankan armed forces were moving towards Madu Church Rev. Rayappu moved the “Our Lady of Madu” statue to an area that was safe. He stated that the area choses Rev. Rayappu was Thevanpitty in the de facto state of Tamil Eelam.

Mr. Karthikesu Kalaiyalagan, a TGTE parliamentarian emphasized the high esteem global Eelam Tamils held inBishop Rayappu by noting, “People in the homeland are requesting the Pope to give sainthood to Rev. Rayappu,” and called on TGTE to also make that request to the Pope.

Mr. Rudrakumaran concluded the TGTE parliamentary homage to Bishop Rayappu’s life by affirming that TGTE will join the call of Eelam Tamils in the homeland in requesting that the Catholic Church bestow sainthood on the Bishop, who, as required of a Saint, lived a life of “heroic virtue.”