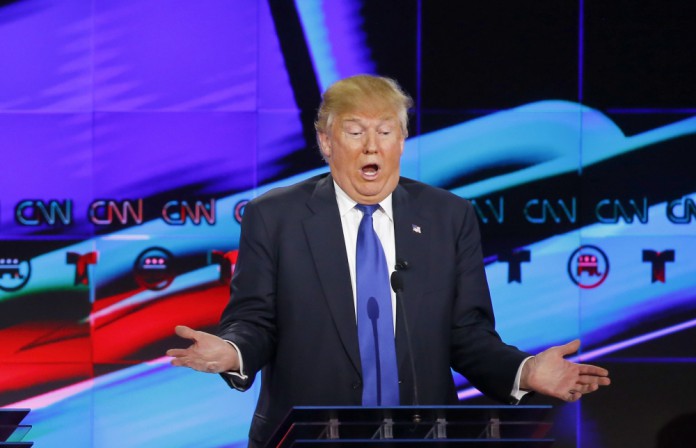 While few could have predicted the political rise of billionaire businessman-turned-Republican-presidential-candidate Donald Trump, one famed early 20th century theologian may have forecasted the American public’s mindset that made such an unlikely person the current GOP frontrunner. That man is the late British writer and theologian G.K. Chesterton.

In an op-ed for Relevant magazine this week, writer S. Craig Sanders, founder of the Louisville Chesterton Society, identifies uncanny parallels between events in Chesterton’s 1904 novel The Napoleon of Notting Hill and Donald Trump’s campaign for the White House.

In Chesterton’s futuristic fantasy, based in England in the year 1984, democracy is dead. British society has become so jaded with the democratic process that it has resorted to a randomized lottery to choose its leader, a “universal secretary.”

Sanders highlights one of Chesterton’s main characters, Auberon Quin, whom the author describes as someone who “never opens his mouth without saying something so indescribably half-witted …” and has “talked nonsense so much that he has half bewildered his own mind …,” descriptions that readers may find resembling a certain outspoken and bombastic Republican presidential hopeful.

To the surprise of those around him, Quin has been selected to be King of England. Sound somewhat familiar?

Before Quin’s selection as King, Sanders explains that Quin and his friends meet a former president of the country of Nicaragua, of which Sanders writes ” … is no longer a nation, but an idea.” Still, the ex-president displays a “patriotic pride” and he issues a serious warning. Sanders writes, “The president warns that Quin is a ‘dangerous man’ because he takes nothing seriously … ”

Sanders’ observation here is eerily similar to what’s currently unfolding in real life within the Republican party as influential conservatives like former Texas Governor Mitt Romney speak out against a possible Trump presidency, essentially saying the businessman would be dangerous for America.

Romney said on Thursday, “His [Trump’s] domestic policies would lead to recession. His foreign policies would make America and the world less safe. He has neither the temperament nor the judgment to be president. And his personal qualities would mean that America would cease to be a shining city on a hill.”

And for the first-time ever in its history, The Christian Post took a position on a political candidate, speaking out against Trump in a Feb. 29 editorial, writing that the publication felt “compelled by our moral responsibility to our readers to make clear that Donald Trump does not represent the interests of evangelicals and would be a dangeorus leader for our country.”

While Trump continues to win Republican primaries despite his abrasive and often offensive style, Sanders in his op-ed highlights his similarities to Chesterton’s Quin, who garners a “devoted following” due to what the book’s author calls “that instinct which makes all men follow (and worship) anyone who chooses to behave like a king.”

in the 1904 novel, Quin plays what he thinks is the ultmate joke by encouraging England’s boroughs to build walls and fly their own colors, essentially dividing the country into individual territories — eerily reminiscent of Trump’s vow to build a wall along the border with Mexico.

Sanders writes, “Chesterton firmly believed in a fallen human nature. Because of this, he thought society would eventually give up on the difficult task of democracy.” He goes on to write, “Trump constantly belittles his peers, discrediting candidates and critics by comparing them to the very people he promises to help. Trump, like Quin, it seems, only cares about himself.”

The Christian Post contacted Sanders regarding his op-ed but did not receive a response by press time.