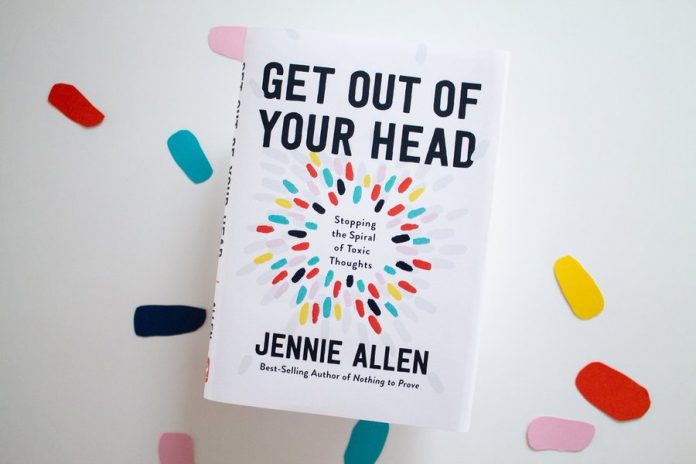 An author, Bible teacher, and founder of the IF:Gathering has released a new book centered on helping Christians win the war against bad thoughts.

In Get Out of Your Head: Stopping the Spiral of Toxic Thoughts, Jennie Allen wants to help fellow Christians deal with what she describes as the “danger of toxic thinking.”

“We have bought the lie that we are victims of our thoughts rather than warriors equipped to fight on the front lines of the greatest battle of our generation: the battle for our minds,” she wrote.

“Whether you find yourself shut down or just haunted by nagging discontent, here is my declaration on behalf of both you and me: No more.”

In the book, Allen says the three key lies people tell themselves are “I’m helpless,” “I’m worthless,” and “I’m unlovable.” The remedy, she said, is that Christians should “allow God to take up so much space in our thinking that our fears will shrink in comparison.”

She listed several ways to help capture one’s thoughts, including setting time aside for silent contemplation, serving God and others, and choosing delight over cynicism.

“Our goal is to be aware of our thoughts and deliberately build them into mind-sets that lead to the outcomes we want and the outcomes God wants for us,” wrote Allen.

The Christian Post interviewed Allen about her book and the topics it touches on, including “self-help,” mental health and the church, and spiritual warfare. Here are some excerpts.

CP: Early in the book, you examined the popular concept of “self-help” books. What would you say are some of the problems with the modern self-help movement?

Allen: I think it’s lacking an end. The greatest personal problem I have with it is it feels like the ultimate goal is believing more in myself and I don’t find myself to be that awesome.

I think that all of us are looking to put hope in something more substantial than ourselves and so I think there’s a lot of good to it, but I also think it can eliminate some of the things that are meant to draw us to our need for God.

Self-help without God at the end always falls short.

CP: You touched base on the issue of spiritual warfare. How do you respond to those Christians, especially in the United States, who might be uncomfortable dealing with this topic?

Allen: I think it is uncomfortable to some extent. It’s very mysterious. While the Bible does tell us some things about it, enough to know that its real and true and happening, there’s still a lot we don’t know. And yet throughout Scripture, what Jesus is clear about and what we know, is that we are the victors.