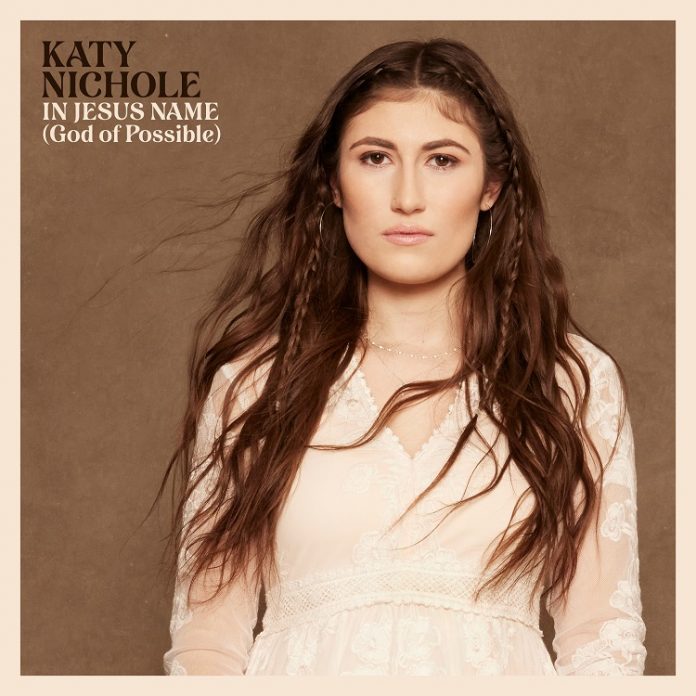 Releasing her first concept music video and a piano version of the song inspired by the early chorus that went viral on TikTok, Nichole also recorded “In Jesus Name (God of Possible)” live for Essential Worship while additional resources for the song are available at PraiseCharts, MultiTracks and Worship Together.

As the song continues to resonate with people of all backgrounds across the world, Nichole is also receiving numerous invitations to sing the song live. Going from zero to 50 concerts on her schedule so far, upcoming events include “Good Friday Nashville” with Chris Tomlin at Bridgestone Arena April 15 plus a K-LOVE-sponsored Live at Red Rocks appearance and a major fall tour (both to be announced soon). She also recently sang “God Bless America” at the NASCAR WISE Power 400 live held at Auto Club Speedway, joined Big Daddy Weave for four concerts and sang “In Jesus Name (God of Possible)” last week during Jason Gray’s SiriusXM The Message Acoustic Story Time event.

With a remarkable 62 Christian reporting radio station adds in 10 days following its release, a feat never been done by a debut single, “In Jesus Name (God of Possible)” also world-premiered on Christian music’s largest radio network, K-LOVE. The video of Nichole hearing her song on radio for the first time has received more than 4.5M views on TikTok and another 2.6M views on K-LOVE’s Facebook page.

Reaching well over 150 million people with the chorus of “In Jesus Name (God of Possible),” 21-year-old Nichole created the song from words in her prayer journal that were written in the midst of a global health crisis and in response to her own story of suffering, hope and healing. She suffered for years with scoliosis before a new doctor took out the metal rods that had been placed in her back, which miraculously went straight, no longer giving her pain.

People worldwide are hearing Nichole’s song and telling their own heart-warming, and many times heart-breaking, stories. Each story branches out into a series of new shares that continues branching virally. More than 7,200 examples of this can be seen now on TikTok.

While her first single is a worshipful anthem ready-made for roomfuls of people to sing, it only reveals one facet of this multidimensional artist who is working on her debut album now, again drawing from her journal and well of life experiences.

About Katy Nichole:
Long before TikTok was even a social platform, Katy Nichole was singing in her church choir. By 14, she was writing songs and leading worship. Her relationship with both music and God is inextricably intertwined with her path to health and wholeness. Having served as both an ambassador for the Shriners Hospitals for Children® and as a volunteer for Musicians On Call, Nichole, at the invitation of Josh Havens, lead singer for The Afters, began leading worship at The Grove in Phoenix, AZ, where Havens serves as a Worship & Arts Pastor. Havens saw something in Nichole she couldn’t even see in herself at the time. She began writing, recording and posting her music online, which eventually led to her making a move to Nashville and landing a label home with Centricity Music.

Share
Facebook
Twitter
Pinterest
WhatsApp
Previous articleSam Collier, Lead Pastor of Hillsong Church Atlanta, Has Announced He Is Stepping Down From His Position in the Wake of the Slew of Scandals Surrounding the Church and Its Founder, Brian Houston
Next articleCharis Bible College to presents a Spring Musical, David: The King of Jerusalem