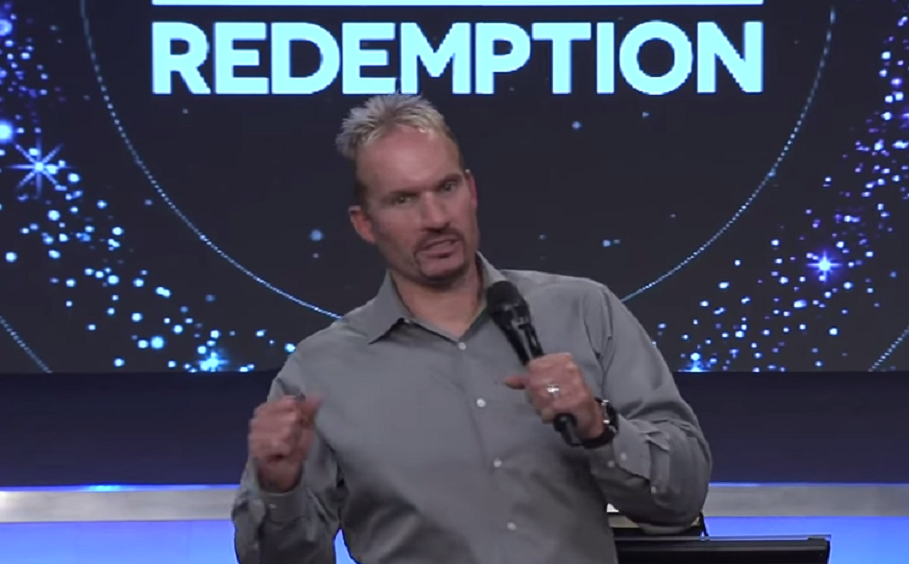 In a sermon which has ruffled some of his congregants and general critics alike since he delivered it last Wednesday, megachurch pastor Ron Carpenter Jr. of Redemption World Outreach Center in Greenville, South Carolina, says he believes people can be born predisposed to homosexuality but “Jesus can straighten” the iniquity.

“I believe much of homosexual activity is iniquity. Doctors don’t believe it, they say they couldn’t find a gene. Well, sin don’t have a gene,” said Carpenter in a recording of the sermon titled “Biblical Truth on Same-Sex Marriage” that was posted to YouTube. The sermon is almost 1 hour and 20 minutes but he shared his personal thoughts beginning at the 1 hour 12-minute mark of the video.

“You can’t open up somebody’s body and find sin. The Bible says iniquity travels three and four generations. The word ‘iniquity’ is not sin. The word ‘iniquity’ means bent or twisted and everybody is born bent toward something. So I disagree with a lot of people who say you can’t be born that way, if it’s an iniquity you can be,” said Carpenter.

“That’s why Jesus said you have to be born again. Because the first time I was born, I was born (bending), but here comes Jesus (straightening). Somebody tell your neighbor Jesus will straighten things out,” he continued.

Carpenter explained that he could not support same-sex marriage because the Bible condemns it, and because he fears God he intends to maintain that position.

“If God forbids me to bless it, I don’t care what’s happening in our culture. I fear God. I am man enough and I love you enough for you to be mad at me right now. But prophetically, you’re finding it hard to be mad at me,” he said.

He then asserted that homosexuality is generational and will only get worse with each generation if it isn’t dealt with, according to Scripture.

“So the reason you can dance in the street is because your father had to hide in a closet. But if you’re dealing and struggling with homosexuality, according to the Word, you’re not the first generation in your family that’s dealt with it. You was [sic] just the first one that lived in a society that would let you speak,” he noted.

Moments before he made an altar call addressing those in his congregation who are struggling with homosexuality, he spoke frankly to the church.

He continued, however: “I believe the Spirit of the Lord is in this place. There’s another group of people that that lifestyle has touched your life and it’s not fun and you’re not happy. You’re in turmoil, you’re in struggle. You’re one of those statistics I’ve read. You don’t want it, you don’t like it, you feel isolated, you feel alone. You hear the jokes and you want to crawl under the table because you don’t want anyone at the table to know your struggle.”

Several people came forward after he made the altar call and he prayed for them.

Two days later, after sparking a broad discussion online with his comments, Carpenter addressed his critics in a Facebook post.

“I knew Wednesday night when I addressed these current issues it would open me up to many opinions … I braced myself for that. I don’t know that I got everything right, I gave it my best shot. I welcome honest discussions on my Facebook page and give you the right and privilege to disagree with me. However, vulgarity will not be tolerated and will immediately be removed from my page. No matter what your opinions may be, I just asked for everyone to keep it clean … thanks Ron C,” he noted last Friday.

Tay Hagood, a lesbian, was among those who disagreed with Carpenter.

“I am a lesbian. I found comfort in knowing that i can be homosexual and saved, and that i can still go to heaven. But, then I’m struggling with the not inheriting the kingdom part. I love my partner, who is obviously of the same sex. We put God in all that we do, and he still blesses us,” wrote Hagood.

“Do I throw our love away, and be alone because I’m physically not attracted to men? I’d be lying to myself and living a lie to pretend to be heterosexual. It all boils down to which misery works best for me. … 1: not inheriting the kingdom because i love my girlfriend; 2: inherit the kingdom by being alone or heterosexual, and still be miserable. I love the Lord, but I can’t help who I am, nor who I love,” she ended.

In reply, Carpenter noted: “Thank you for your honesty. … God doesn’t want you miserable, God wants your life to be abundant and you to fulfill your purpose … know that you are on my heart and I will pray for you.”