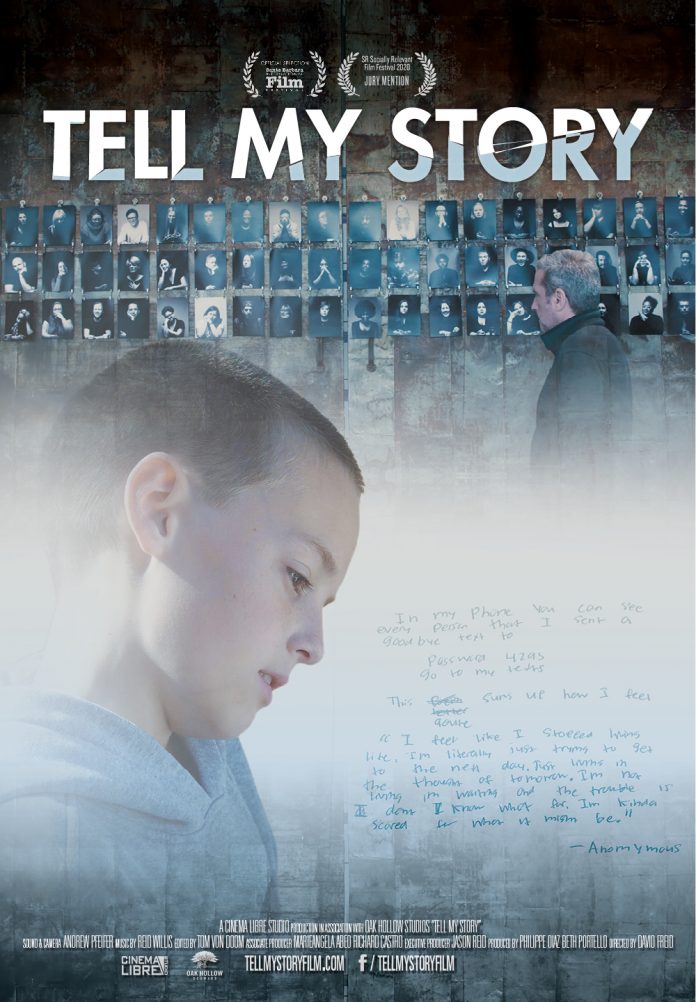 Los Angeles, CA  — In 2018, Jason Reid and his wife, the parents of four teens, went away for the weekend, only to experience the most harrowing moment for any parent: their youngest son Ryan texted to say he was going to kill himself. TELL MY STORY, a feature length documentary, follows Reid one year after his son’s suicide as he looks for the signals he may have missed with his son while candidly sharing his family’s experience. On March 23, 2021, TELL MY STORY was released on DVD, video on demand and theatrical on demand platforms and will stream for 90 days on WellBeings.org, a multi-platform multi-year campaign to address the critical health needs in America. Wellbeings.org was launched with a focus on youth mental health to raise awareness and shed stigma through candid conversations and storytelling. TELL MY STORY, along with original broadcast and digital content, continues to build on the Wellbeings.org mission to encourage compassion and a better understanding of mental health challenges facing teens, parents and families across the country.

Motivated by a note left by his son to “tell my story,” the grieving Southern California father embarks on a quest to understand what he could have done differently to prevent the suicide and especially the role that cell phone use and unfettered access to the internet may have played, with the hopes of helping other parents and caregivers. Jason’s quest begins with Mariangela Abeo, a Seattle-native whose photography project Faces of Fortitude profiles survivors of suicide.

Parents Bobbi and Ed Villareal, co-founders of Project 99, a Southern California non-profit that brings awareness about mental health and suicide prevention to schools, share their experiences after losing their 16-year-old son Diego to suicide in 2015.  They describe warning signs that they had missed, such as increased moodiness and pulling away from friends, stressing the need for kids to have someone they feel safe to talk to potentially outside of the family.

Flying to Seattle, Jason attends a group meeting with several young suicide survivors where they discuss the significance of social media, bullying, isolation, and what it feels like when depression spirals out of control.  Jason then visits a wilderness camp in Nevada City, CA, where Collin Kartchner, with #SaveTheKids, warns teen campers (and parents) about the impact of unmonitored cell phone time and social media access on their lives. Peter Mayfield of the Gateway Mountain Center in Truckee, CA, shares the tenants of his program which helps kids develop a stronger sense of self through physical activity in the outdoors while building relationships, practicing problem solving, and building resiliency and the ability to come back after taking a “hit” without a parent/adult trying to “fix” things for them.

Back at home in Murrieta, Jason and his children attend a safeTALK seminar, where participants learn of the warning signs of suicide and the importance of being able to talk about suicide, debunking the misconception that talking about suicide causes suicide. Jason’s journey concludes at Didi Hirsch Mental Health Services in Los Angeles, which provides mental health and suicide prevention services and operates a 24/7, multilingual Suicide Crisis Line that is part of the 1-800-273-TALK National Suicide Prevention Lifeline network.

In 2019, as the film was being shot, the center fielded over 1000 calls a week from teens, with the youngest caller identified as 8 years old. Finally, Jason speaks with Dr. Mark Goulston, PhD, a psychiatrist and suicide prevention expert, who explains the chemical impact of cell phones and constant adrenaline on people’s brains while sharing techniques to break through to uncommunicative teens.

TELL MY STORY is produced by Cinema Libre Studio’s Philippe Diaz and Beth Portello and was an official selection at the Santa Barbara International Film Festival and premiered in January 2020 before the pandemic.

‘Tell My Story” has a running time of 85 minutes, is not rated and is heading to DVD and SVOD (Amazon and Vimeo) on March 23, 2021 with additional platforms to follow. The film’s website includes additional resources culled from experts including “Recognizing Depression in Teens,” and “How to Begin a Conversation with Your Teen.”

A grieving father seeks answers after his 14-year-old son dies by suicide. He uncovers painful truths about the lives of teens, the impact of unfettered access to internet and social media, and the shocking rise of depression among America’s youth.

The journey brings him together with young suicide survivors, prevention experts, and parents trying to understand the 70% increase in adolescent suicide. Closer to home, with his family fractured, he examines his son’s technology use to discover what no parent wants to find.

Seeking to find the warning signs that were missed, he instead finds ways to reverse the isolation and disconnectedness that is killing our youth.

About WELL BEINGS
The WELL BEINGS campaign addresses the critical health needs of Americans through broadcast content, original digital content, and impactful local events. The multi-year campaign, created by WETA Washington, D.C., brings together partners from across the country, including patients, families, caregivers, teachers, medical and mental health professionals, social service agencies, private foundations, filmmakers, corporations and media sponsors, to create awareness and resources for better health for all. To learn more, visit WellBeings.org or follow @WellBeingsOrg on Instagram, Facebook, or Twitter, and join the conversation with #WellBeings.

The Well Beings Tour will be coming to 34 cities across the country, 2020 – 2022, in collaboration with public media stations, local community organizations, national sponsors, and partners. Through resource fairs, panel discussions, youth storytelling, performances, Mental Health First Aid Training, and more, the Well Beings Tour will convene and connect communities in a joint effort to address stigma and raise awareness about mental health and well-being.

About WETA
WETA is the leading public broadcaster in the nation’s capital, serving Virginia, Maryland and the District of Columbia with educational initiatives and with high-quality programming on television, radio and digital. WETA Washington, D.C., is the second largest producing-station of new content for public television in the United States, with news and public affairs programs including PBS NEWSHOUR and WASHINGTON WEEK; films by Ken Burns such as COUNTRY MUSIC, KEN BURNS PRESENTS THE GENE: AN INTIMATE HISTORY and THE ROOSEVELTS: AN INTIMATE HISTORY; series and documentaries by Dr. Henry Louis Gates, Jr., including FINDING YOUR ROOTS WITH HENRY LOUIS GATES, JR. (Seasons 3-6) and RECONSTRUCTION: AMERICA AFTER THE CIVIL WAR; and performance specials including THE KENNEDY CENTER MARK TWAIN PRIZE and THE LIBRARY OF CONGRESS GERSHWIN PRIZE FOR POPULAR SONG. More information on WETA and its programs and services is available at www.weta.org. Visit www.facebook.com/wetatvfm on Facebook or follow @WETAtvfm on Twitter.

Cinema Libre Studio is a mini studio known for producing and distributing high-quality feature films and social impact documentaries. The company is in pre-production on a feature film about the Angola 3 and a feature length documentary on CNN camerawoman Margaret Moth. Headquartered in the Los Angeles area, the team has released over 200 films including: THE END OF POVERTY?,  CAN’T STAND LOSING YOU: SURVIVING THE POLICE, and Canada’s 2020 Oscar ® submission, ANTIGONE. Visit: www.cinemalibrestudio.com, https://www.facebook.com/cinemalibrestudio  or find us @CinemaLibre on Twitter and Instagram.