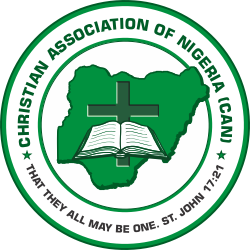 The Christian Association of Nigeria (CAN) is the largest Ecumenical Body ever established in Nigeria and in deed Africa.

On 27th August 1976 the (then) Federal Military Government, under Gen. Obasanjo invited several Church Leaders of diverse denominations to Dodan Barracks, Lagos. the Government’s sole purpose was to hold a discussion with the Church Leaders, on the National Pledge and the salutation of the National Flag, which the Government intended to introduce into the Nation’s Primary and Secondary Schools. The Church Leaders did not object to the introduction of the two items provided and on the condition that reading and reciting the National Pledge and saluting the National Flag would be preceded by the usual Morning Devotions, during which the Staff and the Students of each school worship their Creator and offer Praises and Prayers to Him. Immediately after the meeting the Church Leaders spontaneously decided to go to a place, not too far from Dodan Barracks where they could hold another meeting. the Catholic Secretariat opposite the race course bus stop was unanimously chosen.

At the meeting, the Church Leaders arrived at a monumental decision that they should from an organisation which would provide a forum where they could regularly meet together and take joint actions on vital matters, especially on issues which affect the Christian Faith and the welfare of the generality of Nigerians. That was the origin and the beginning of the Christian Association of Nigeria (CAN).

Those Church Leaders who met at Dodan Barracks and later at the Catholic Secretariat on the historic August day, were right in their conviction that the Omnipotent God Himself through the Holy Spirit gave them a special ecumenical assignment. It was this conviction which prompted them to select out of the several names suggested for their coming together the name Christian Association of Nigeria (CAN). They strongly felt that with the help of the Holy Spirit, the Church in Nigeria can and will achieve unprecedented feats, to Christ.

That mustard seed planted on that eventful day has now grown to cover all the nooks and crannies of Nigeria with the Head Office at the National Christian Centre Abuja.

The first constitution was signed on 20th April 1977 the founding fathers with:

CAN is an Association of Christian Churches with distinct identities, recognizable Church structures and system of worship of one God in the Trinity of the Father, Son and Holy Spirit. The Association makes Christ the centre of all its works and shall promote the glory of God, by encouraging the growth and unity of the Churches and helping them to lead the nation and her people to partake of Christ Salvation and all its fruits. the motto is – that they all may be one – John 17: 21.

The Mission of the Association is to meet regularly and take joint action on vital matters, especially on those issues which affect the Christian Faith and the welfare of the generality of Nigerians.

A close study of the growth and development of CAN will reveal that it received its supreme mandate from our Creator Himself who through Jesus, has ensured that Holy Spirit shall consistently serve as Association “Guide, Philosopher and Friend. Thus it was, that the Association was divinely inspired to choose our Lord’s pastoral prayer as its motto -”they all may be one” John 17:21. Without any doubt whatsoever that the motto imbued with the irresistible supernatural force which manifests itself in the gravitational attraction which continue to drawn more and more Churches into fold of CAN.

At first the founders of CAN classified the Associations’ member Churches into three – the Roman Catholic Church, the Christian Council of Nigeria and others. As the number of the Churches which earnestly desired to join CAN increased phenomenally, it became clear that the member Churches should be reclassified. Consequently the Association’s constitution as revised by its 1991 Assembly and okayed the division of Church Groups into 5.

A Jihadist Overcome by the Love of JESUS